With the Youth Team currently going through the associate process, signing players on, arranging games and everything that goes alongside running the team, it’s also good to know who is behind the day to day grind. Planning sessions, building playbooks, creating the programmes and developing the young players into footballers… so, here is the coaching team and hope the article allows you to get to know your coaches.

Coach North, like his two colleagues, is a veteran of the game even at his young age. He started in the sport whilst at school with the Woodham Warriors. Whilst with the Warriors, he was an integral part of the team playing as a running back, which got to three separate Britbowl finals. Another of his achievements was playing in the DODDS League against teams from the States. Once leaving school, Andy was at the age at which he needed to play Junior football, signing for the then Newcastle Vikings Juniors, alongside playing for the Woodham Warriors Flag Team. In 2019, he signed for the Steam during the associate season, making his debut against Furness Phantoms. He has been a starting defensive back ever since and also coaches his position to his fellow players.

Due to his experiences in the sport, when presented with the opportunity to coach the Youth Team, he grasped it with both hands. His coaching experience that he has gained through working in a Primary School as PE Apprentice, Sports Coach and Teaching Assistant, allows Coach North to deliver sessions of the highest standards, standards that he also requires from his coaching staff.

We have a very bright future ahead of us. We have a very strong group of both players and coaches. In the future, we are planning on making a huge impact on youth football in our region as well as in the National Leagues with BAFA, enabling us to promote the game and making it more available for people to play.

Coach McCabe started playing at the age of 14 for the Woodham Warriors for three years, like Coach North, leaving to play Junior Football due to age restrictions. Jordan played in two finals within three years which is a great achievement. In his first year, he didn’t have a solidified position but due to his background in Rugby and his ability to tackle well, he was given the opportunity to play linebacker. This transitioned into him switching to the offence in the role of centre (the role he currently plays for the Steam Senior Team at present). Jordan didn’t look back after this switch, he found his home, being a starter, captaining the team for his remaining years in Youth Football.

In his current role as OC, Jordan feels his experience at playing on the offence, allows him to teach all of his knowledge he gained from his youth days, will transfer into developing the Youth squad into a force.

I aim to bring my experience, knowledge and work ethic into the Youth Team rather than any other discipline as Youth Football holds a special place in my heart and always will. It is what introduced me to the game and I had some great times and learnt a lot. I have high hopes for the Youth Team and with hard work and dedication, I feel as though we can go places in the very near future.

Coach Coatsworth played for Woodham Warriors for two seasons from the age of 14 to 16 years old. His achievements include being part of the starters in two National Finals, unfortunately losing those finals but runners up is still a huge success. Like some of our current youth players, father time caused him to move to Junior level where he played for the Newcastle Vikings for six months, then as they became the North East Academy, playing for a year with them.

Alex had a hiatus from the sport as he was in football purgatory, which saw him sign with the Darlington Steam, which he has been a starter at Outside Linebacker for nearly four years now.

As the Youth Team section of the Steam was forming, Coach North brought Alex on board as the defensive coordinator due to his playing career being predominantly as a defensive player. His knowledge and reading of the game allows him to develop the youth to be great fundamentally defensive players. This is also why he decided to accept the role instead of trying for a role on the senior or flag team. People need to be put in their best position in order for them and others to succeed and reach their maximum potential.

I want to have a steady stream of fresh talent for the Adult team, which have gone through the Steam programme. I believe the team is well on its way to being a good team, even a great team but there is always room for improvement and further development. In my opinion, the future could be very successful in both youth and moving onto the junior phase. This is dependent on the recruitment which is going really well at present, depth is key…

So there you have it, three great coaches with a mountain of experience at the Youth level. It’s a great foundation being built, especially now that the associate process has started. We will be having games in the very near future so get yourselves down to watch the excellent standard of players and coaches… support the future, it’s going to be an exciting place to be…

See all posts by Darren Mitchell 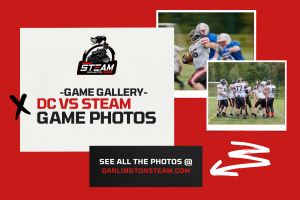 Flag Team and The Associate Journey